Since 2014 we have presented annual greenports awards in the categories “Ship with the lowest emissions” und “Shipowner/charterer of the fleet with the lowest emissions. The objective of the greenports awards is to honour particularly environmentally friendly ships or shipping companies. Although the greenports awards does not come with a monetary prize, winning the award is a public honour and for the last two years, bremenports has also undertaken to offset the emissions for one port call on behalf of the winners. The award winners also receive a certificate as a symbolic prize that is intended to raise awareness of the emissions that have been avoided and publicise the option of subsequent regional CO2 offsetting. The Environment Ship Index (ESI) score achieved the preceding year serves as the basis for calculating the winners. A vessel has to call at the ports of Bremen several times to qualify for the greenports award, a condition which was introduced as a token of our appreciation for regular users of the ports compared with vessels which call only once. 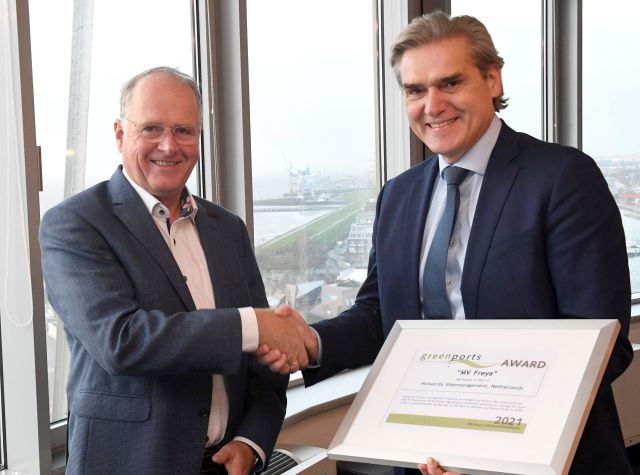 In 2021 the greenports award for the category “Most eco-friendly vessel” and the award for the category “Most eco-friendly fleet” went to the shipping company Holwerda Shipmanagement. The Dutch company has been in the shipping business for 130 years and operates ten container vessels. Holwerda killed two birds with one stone with the MV Freya, achieving an ESI (Environmental Ship Index) score of 56.11 points in both categories.